“Deep, unspeakable suffering may well be called a baptism, a regeneration, the initiation into a new state.”*

Christmas: Jesus is born to his father and mother; he begins as a member of a family.

Eight days later, he is circumcised, and shortly after that he is brought by his parents to the temple to be dedicated to the Lord, as he was the first born. (Ex. 13). Rituals of purification and introduction into the religious community.

At twelve years old, as we heard two weeks ago, we find Jesus separating from his parents and making his way to the temple. Here his introduction into the religious community becomes more intentional, more personal. Not just an external ritual, but an internal, personal engagement with the Divine text.

And the next scene, before us this morning. 30 year old Jesus being baptized by John in the river Jordan. Leaving the constraints of the religious community, and striking out on his own, spiritually speaking.

(Having found something “inside” the story, he sets out to “become” the story.)

Infant baptism, performed often here at Wayfarers, are happy events. They are joyous, warm, and intimate. Lots of smiling faces, and plenty of photos. Nothing wrong with positive emotions, but in this case they often eclipse or cover over the darker, more challenging aspects of Jesus’s, and our own, spiritual baptism.

John is said to “baptize with the waters of repentance”: let’s start with the literal meaning of these words.

Baptize = to immerse; to cover with liquid completely

Baptism/immersion: a total commitment to God, not partial; a dying to the lower self. (Traditional initiation rites recreate death and rebirth; falling and rising to new life; dying to old/false self and awakening to our new/true self.)

Water/spiritual truth: Water is to the body what spiritual truth is to the mind. Water cleanses the body of dirt and impurities, and helps its many parts to function. Spiritual truth, which we get from the Word, cleanses our minds of falsity, narrow mindedness, prejudice, false opinions, and pride in self-intelligence. The Word of God reminds us of who we really are. (By contrast, natural truth allows us to interact with the outer, external world just as we are, no change needed. Spiritual truth introduces us to a more difficult path, one which leads us to change, grow, and ascend.)

Repentance/metanoia: A new, higher level of mind; a clearer understanding of who we are and how we should live. (meta = above or beyond; noia, from nous = mind)

Jordan River: “’The waters of Jordan’ signify the truths that introduce into the church, which are the knowledges of good and truth from the Word, and ‘washing’ therein signifies purification from falsities, and consequent reformation and regeneration by the Lord. For this reason, baptism was instituted, which was first performed in the Jordan by John.” (AE 475.19)

Let us remember that a ritual doesn’t change anything; rather, it points to and represents metaphorically what that change must look like. So what change does baptism point to?

Exoteric, traditional Christianity looks outward, convicts the world/others of sin, and sets about to compel them to repent (preach the gospel, proselytize, convert, baptize, and “set right”). Esoteric, inner Christianity looks inward, discerns a tension between good and evil within the individual, and sets about to sort things out and clean house; it sets about the task of “self-compulsion.” (Inward Christian Soldier!) No one can be compelled to adopt a spiritual identity. Rather, they are reformed and made new who compel themselves. Before we go up, we must go down; before the grain of wheat can bear fruit, it must die. No one is reformed or made new without temptation struggles; battling against ourselves.

Many of us have been baptized with water (whether we remember it or not!), but many of us have little desire to experience a baptism of fire. Many of us have been introduced to the church when we were young, and raised with one or another “sense” of religion; few of us are eager to take up a cross, to hate our lives in this world, and to commit ourselves to God 100%. And yet therein lies the good news, the promise of new life.

It’s one thing to be immersed in and cleansed by water; it’s another thing to truly examine, claim, and reject falsity and ill-will within ourselves, especially when they feel good. Only inner struggle and combat (and the experience of losing – to God) moves us from earth to heaven. This is the baptism of fire which is to come, the separating of the wheat from the chaff; the good from the evil.

Genuine baptism is like walking through a door, into a world we had only known intellectually (through words, stories, ideas, symbols, etc.). Now we begin to experience it actually; and we find it is much more complicated and difficult than we had “thought.” Instead of asking questions about life, life now asks questions of us. Who are you, where did you come from, where are you going, why do you do what you do? Now we turn inward, toward self-examination, moral inventory. Now we no longer need to change the world, for we are focused on changing ourselves. Here there is challenge and suffering (not physical pain, but psychological distress, anxiety.) There is a cost; we are challenged at every turn to be authentic; to let go of proprium, which we love so dearly.

It’s one thing to be admitted into a school, it is quite another to complete the course.

It’s one thing to be admitted into a theater, it is quite another to experience the film.

It’s one thing to be admitted into a field, it is quite another to play the game.

John represents the literal sense of the Word; the best that the natural mind can do with scripture: obey the law! (“The greatest born among women, but least in the kingdom of heaven.”) He is harsh and commanding, calling people to change their outward behavior. This is an initial stage of growth which Jesus has completed. And so Jesus is baptized by John; passing the baton, as it were, to one greater than he. Here Jesus receives his baptism of repentance, his metanoia, his immersion into a higher level of mind. And the baptism of fire begins immediately afterward in the wilderness temptations, as Jesus is led inward, and continues to the cross and beyond; during which time he is gentle and forgiving, calling people to reform not their behavior, but their minds and hearts. And it continues all the way to the upper room, when the disciples themselves are baptized with rushing wind and tongues of flame, Spirit and fire, wisdom and love, at Pentecost, and the church is born.

Baptism by water: after proper preparation and growth, a sincere first step into the truth of spiritual life; getting to know and understand it.

Baptism by fire: this first step leads to struggle and decision, as we gradually come to know the good of spiritual life; willing it, living it.

Up until his baptism, Jesus is obedient; to his parents, to his tradition, to the letter of the law. Here, at his baptism, he moves from group consciousness to individual conscience; he begins to respond to a higher law, the spirit of the law; not another law, but a deeper, more authentic understanding of the same law; a personal understanding. He is the beloved Son because he is now obedient to his heavenly Father, and is willing to follow where he leads.

“In Luke 3:16, it is said that John baptized with water, but that the Lord would baptize with the Holy Spirit and with fire. This means that John only inaugurated the people into knowledges from the Word respecting the Lord, and thus prepared them to receive Him; but that the Lord Himself regenerates people by means of Divine truth and Divine good proceeding from Him. For John represented the same as Elijah, namely, the Word; “the waters” with which John baptized signified introductory truths, which are knowledges from the Word respecting the Lord; “the Holy Spirit” signifies Divine truth proceeding from the Lord; “fire” signifies Divine good proceeding from Him; and “baptism” signifies regeneration by the Lord by means of Divine truths from the Word.”** 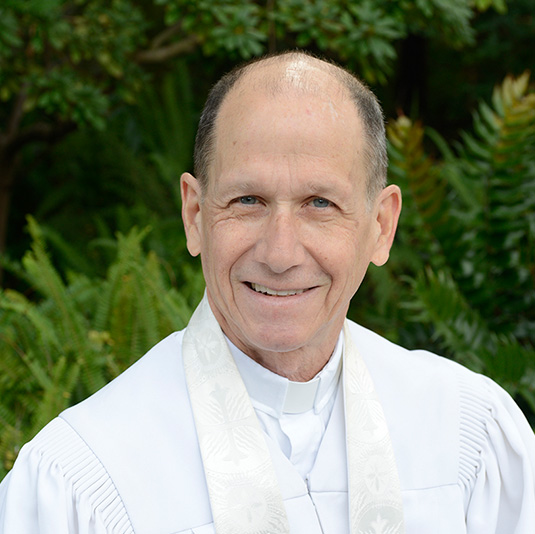 Rev. Robert McCluskey, B.A., M.A., is a graduate of the Swedenborg School of Religion, and was ordained into the Swedenborgian Church of North America in 1984.

Rev. McCluskey has pastored Swedenborgian churches in Portland, Maine and New York City, and for 17 years served as Swedenborgian representative to the National Council of Churches.

Join Our Email List
For Email Newsletters you can trust.